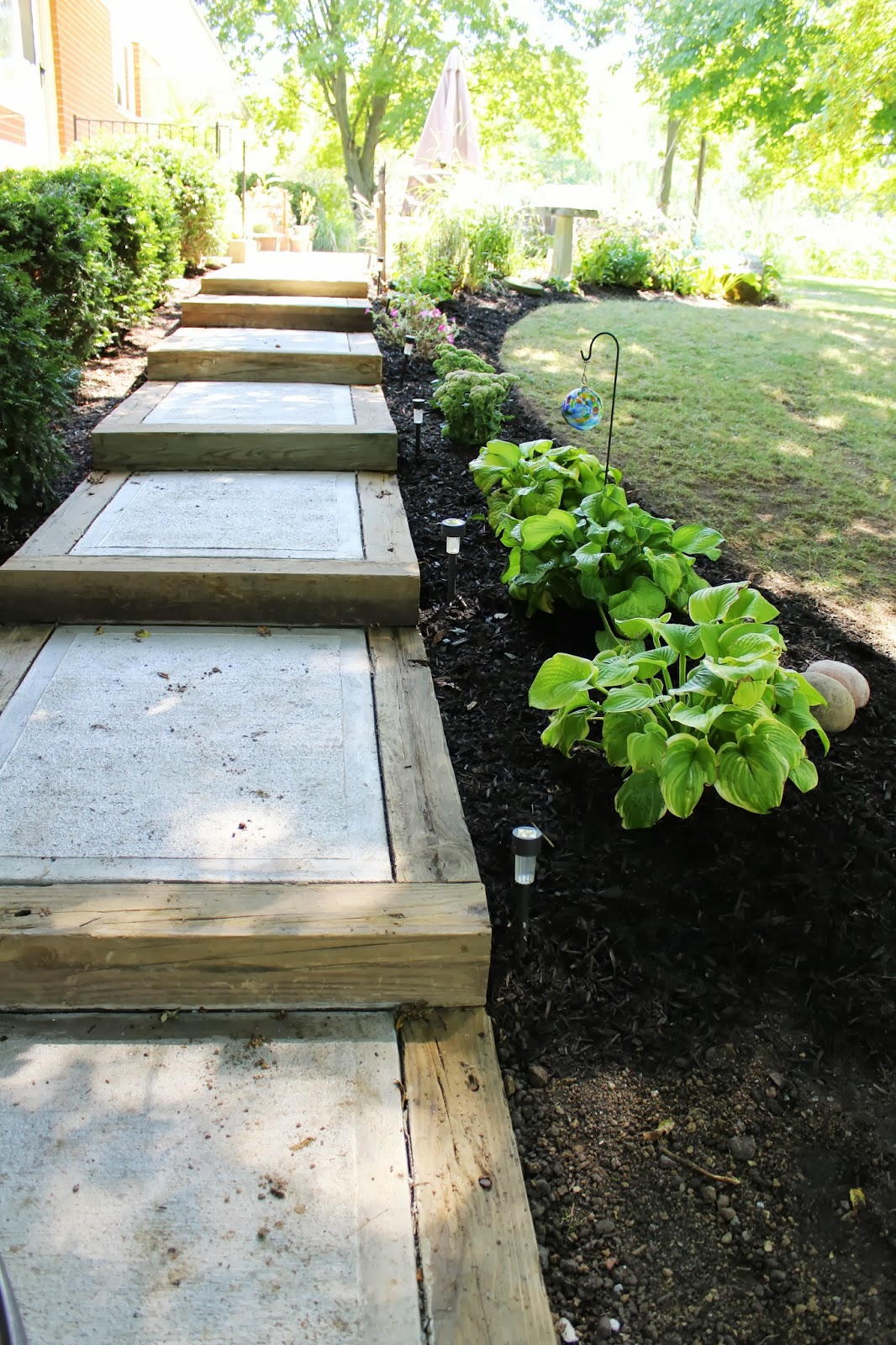 We have a slope on one end of our ranch style home.  Our garage is under the dining room on that end of the house.


There wasn't a patio here when we purchased our house 2 years ago.   And no walk from the back door down to the garage.

Nothing but a worn path through the grass, which has mostly turned into DIRT.  Ugh!

Last year we had a stamped concrete patio installed, but that still did not solve the problem of a walk and stairs down to the garage.

A couple months ago my son called from a construction job site where he was working so I could salvage the large 6 x 6 x 10 pressure treated beams from a playground being torn up.

After speaking to the job site foreman, I was able to salvage 35 of them and boy are they heavy.


While my daughter and I were loading the 6 by 6's into our Ford F-150 pickup, I was already drawing up plans in my head for a sidewalk.
After figuring the slope (or drop) in the area I planned to build the walk, and then calculating how many 6 x 6 beams I would need, I started the walk.


The beams actually measure 5 ½ x 5 ½ inches wide, so if you decide to build a walk or anything with wood, take into account that lumber is no longer cut to the size stated.
For instance, a 2 x 4 is not actually 2 inches by 4 inches.


With about a 42 1/2 inch grade (or slope), I could make 7 steps, with 4 inches left over which meant I need to adjust one or two steps to make it all level.

About 2/3 of the way down our hillside are stairs going up to a covered back porch and deck area.
At the bottom of those stairs is a concrete slab.  This was my starting point, and I worked my way up the hill to the patio.


To begin, we dug the dirt near the concrete slab down a couple inches so that the first step is braced against the concrete.  This will help with stability and control any shifting that might occur.


I measured the same distance from the house out and along the entire area to make sure the walk would be straight all the way up the slope.

We cut the 6 x 6's and made a square, putting it in place and making sure it was level.  In each corner, we attached an L-bracket to hold the 6 x 6’s together.  Make sure to place the bracket far enough down that the cement, gravel or brick you are using will cover them.  After the square was in place, we drilled holes into each 6 x 6 to install rebar. I love cordless screwdrivers and reciprocating saws.  If you do not have one, you just don't know what you are missing. So easy to use and portable!


Anyway, the rebar is pounded into the wood, and into the ground to hold the 6 x 6's in place. Because we're using salvage or "used" 6 x 6's there are already a few holes drilled into the wood.
We dug out the inside of each square or step to make room for a gravel foundation later.


The first step is complete!


Both steps are the same distance from the house and the same width.  The length of each step depends on the slope of the hill and getting the step level.  Digging is involved in the process.
A lot of digging.


Once step two is level and all four corners are secured with L-brackets, we secured the two steps together where they are overlapping with a straight heavy metal bracket.  My concrete guy, Shane told me we probably could have used larger brackets, so keep that in mind if you decide to construct a similar walk.


Again we drilled holes into the 6 x 6’s and installed rebar to hold the step in place and to help prevent shifting.


All steps were completed in the same way. 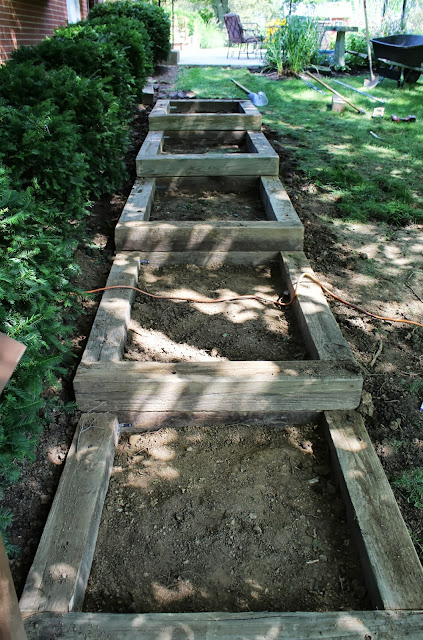 When we got to the last two steps, near the patio,  I needed to adjust for the extra inches mentioned earlier.  Since we had lowered step one below the concrete slab in the beginning, I was only a couple inches off from the last step meeting the patio completely level.  This, my friends, was the head scratcher and took a few minutes to figure out.

I was of the opinion that we should shave off 2 inches from the bottom of one of the 6 x 6’s, which would cause the last step to set 2 inches lower and end with the walk level with the patio.
Just at that moment, my son Daniel came outside.  After explaining the dilemma, he was the one who suggested just lowering the back 6 x 6 post of the next to the last step.
Remember: Work smarter, not harder.
So, the second step down from the patio, we dug out and lowered the back of the step's 6x6 post 2 inches below the rest of the step frame, and then attached the L-brackets.   This made the last step just slightly, but not noticeably lower than the rest of the steps but made the step end level with the patio.

The last step or top step was also the longest and on the least sloped part of the hill.

After all the frames were complete, we filled each with about 2 to 2 ½ inches of  #304 Limestone.
There is a difference in which rocks or stone you use.  Regular #304 is nothing more than busted up concrete pieces.  #304 Limestone (which is limestone) sets up firm and makes a much better foundation in which to pour concrete over.  I suggest you install the gravel foundation if you are installing brick or pea gravel too. 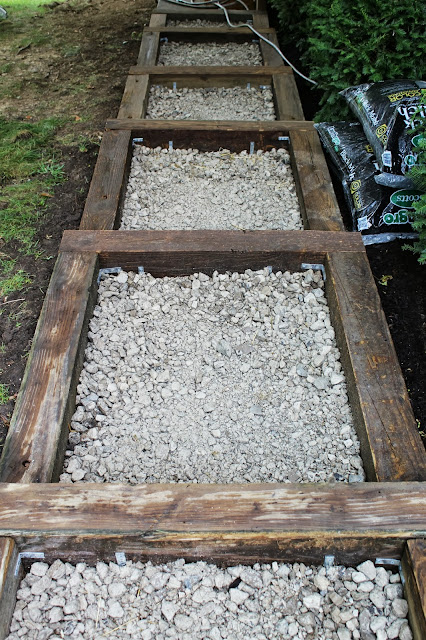 We had originally thought we might just put pea gravel in each step, or maybe brick each one.  But after further thought, we decided to have concrete poured into each one.


My nephew Sammie recommended a company called Joshua Tree.  The owner, Shane Gemmell did a great job and at a reasonable price.
He even covered the 6 x 6's so no concrete would get on them. 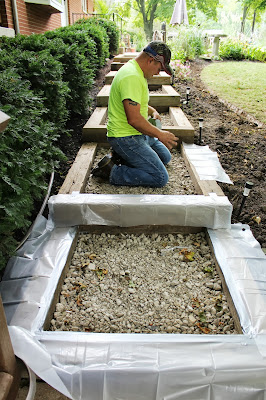 As you can see by the above photo, I did not waste one minute in starting to landscape the area!
We had other quotes to do the sidewalk, one for $3000.00 before we starting building the frames and another for $2800.00 with most of the framing complete! Way way more than we were willing to pay and in our opinion, way over priced for the job. And when one contractor said he would have to saw through many of my Maple tree roots, I cringed.
These are the trees I tap for Maple Sap to make syrup. 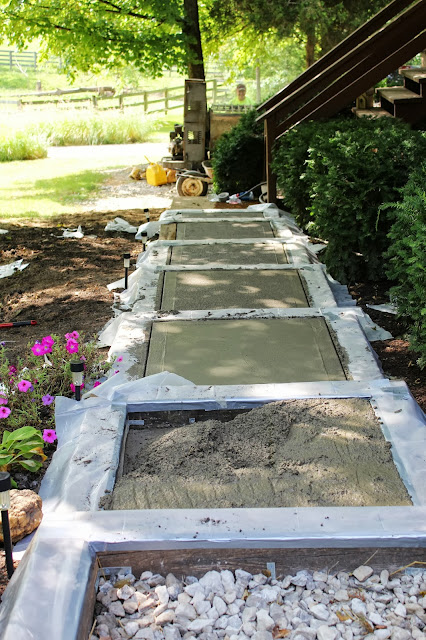 We were impressed with Shane's work and attitude so much that we asked him finish building the remainder of the walk area, which was from the concrete slab, turning and descending steeply down to the garage. And Shane pretty much stayed with my original design. 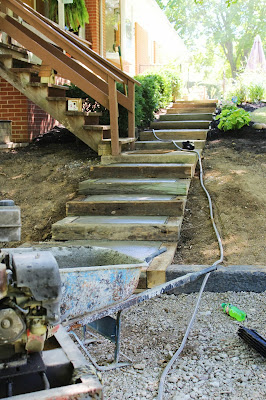 Salvaging the 6 x 6’s and doing most of the work ourselves saved us a lot of money and gave us a total cost of approximately $1300.00. We are still amazed at how well our step frames turned out
and we think it all looks amazing! 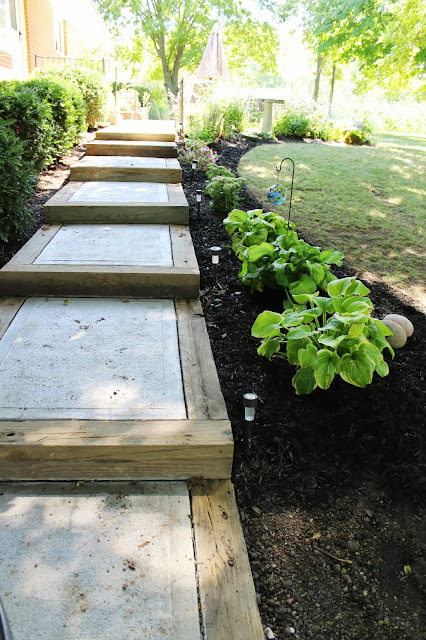 This area is under my large Maple trees so we're using shade plants for landscaping which will include lots of hostas, and I will also need to reseed the grassy area.

Hope your Do-It-Yourself projects are turning out as well as you had hoped. Send me photos, I would love to see them!

Building a Greenhouse (Part One)

UPDATE:
I receive quite a few emails and messages with questions about this sidewalk and from people thanking me for sharing my design. Recently Stace Drumm, from Norwalk, Ohio sent me photos of their hillside stairs project and it looks fantastic!
Thanks so much Stace for sharing and your home is beautiful!

I'd love to hear from you so please leave a comment.

Hello, I'm Elizabeth. I so glad you're here!